​We’re Only Human I Suppose

After a quick family sojourn to the car park to retrieve our evening attire, we return to the arena and set up for the night erecting our sun tent. The picnic blanket is unrolled in front and the luminous blue Lay Sac is gracefully inflated by yours truly before being placed in front of the shade providing half tent. All the comforts of home for our happy festival family. Well almost. It’s obvious that Logan and Fearne are not in the best of moods as they have been denied 15 mins of fun in the adjacent play park. Obviously we have planned this. A quick family pow wow and a few air clearing truths about our commitment to a happy family life are delivered before we witness the arrival of Steve Mason and his band of brothers. 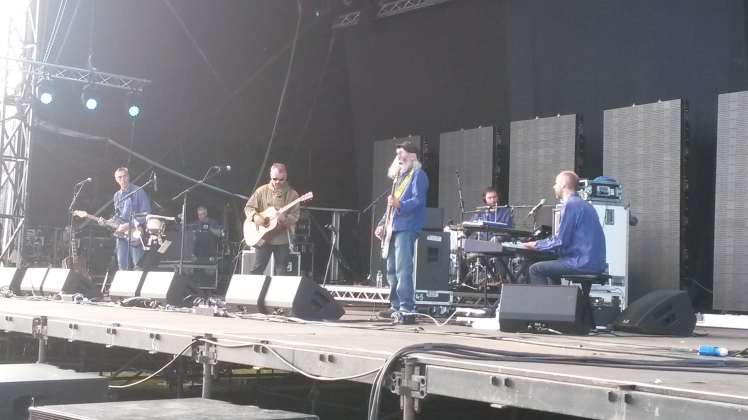 The ex-Beta Band front man ambles out onto the stage wearing a green smock like parka with a brown leather belt and a pair of goggle sunglasses. The image is that of a modern day football casual-monk. He introduces his band and pays particular attention to the keyboard player letting everyone know he got married the previous day, before entering into a solo career spanning set. This performance is loaded with songs from Meet The Humans, his recently released album, including (as I remember it) Planet Sizes, Another Day and Water Bored. He also plays some older tunes, a favourite of mine being Seen It All Before from his 2nd solo album Monkey Minds In The Devil’s Time. (I stand to be corrected on this one, but as I remember it this was played).

Steve Mason shifts from guitar to hand held percussion instrument, the name of which I don’t know but it wasn’t a tambourine or a cowbell and starts prowling about the center stage. You can sense a modicum of agitation entering his demeanor and it’s not just down to the fact that at various times throughout the set he can be seen adjusting the belt whilst commenting on his “wardrobe malfunctions”. Nope he is definitely warming up for something. Meanwhile, in keeping with the family festival idea, I have made my way to the front of the stage with my 6 year old daughter, Fearne in tow and she is on my shoulders for the introductory words spoken from Steve, “I wish this wasn’t a song that was relevant today, but it is”, before launching into the anarchic call to arms of Fight Them Back with it’s acerbic announcement at the end of the first verse, “I feel sad to say the words here that must fall, Upon my lips, you see I f*cking hate you all” and it’s catchy chorus refrain, “You get up, fight them back A  fist, a boot and a baseball bat”. These words are obviously aimed at the capitalist establishment so hated by our entertainer. I can feel Fearne dancing along whilst I digest the meaning of the song Lyrics. A true family experience.

Electric Fields hasn’t pulled it’s punches in it’s choice of acts and on this evidence the acts certainly haven’t toned down their message.